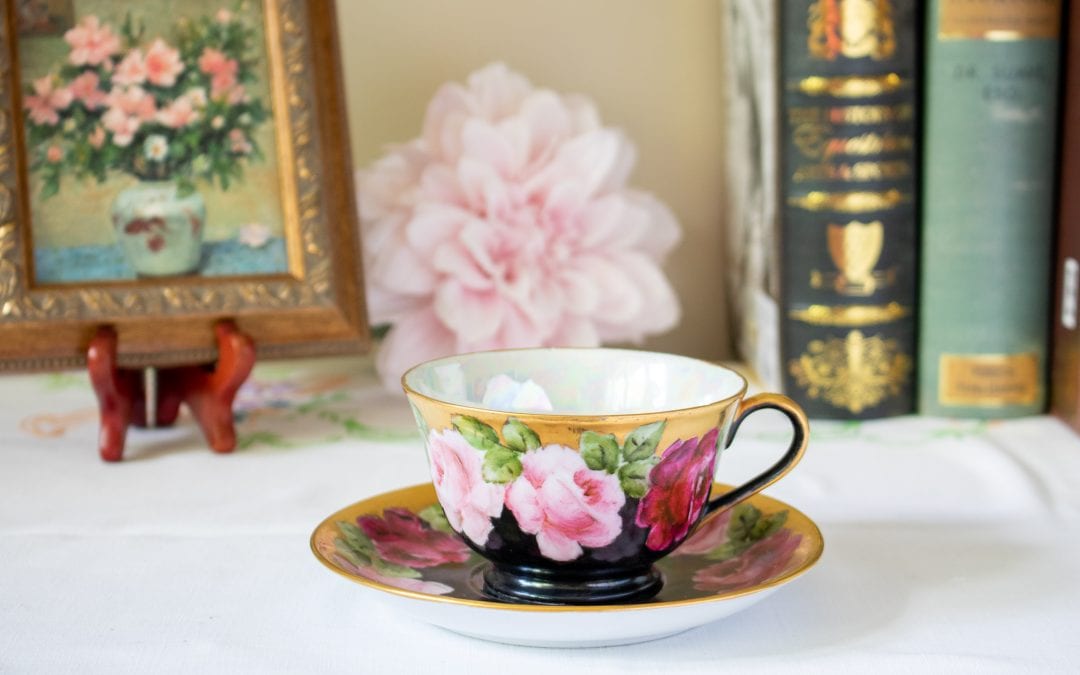 Long before the Internet and all of the distractions that it offers, young ladies in the late 1800s would occupy their free time with china painting. In fact, many young women enrolled in formal art schools and became accomplished artists. Soon galleries were set up with annual exhibits of china painting which in turn became juried shows. Encouraged by the aesthetic movement which appreciated the creation of items for their beauty without any underlying political or philosophical ties, china painting rose to artistic and social status by the mid-1870s. The Arts and Crafts movement furthered the appreciation of handcrafted, unique designs that involved personal contribution. One of those ladies was Edith Vandermade, a Canadian ceramist, and china painter.

Herbert Minton and Henry Doulton were also fans of the Arts and Craft movement and subsequently employed many of the talented and trained young women in their factories. They also employed lesser talents to do hand coloring work. Many women of this time went on to become recognized and created professional careers for themselves. China painting was considered an appropriate activity for middle-class women in late-Victorian society. For some women, it was a pleasant diversion, for others a serious art form and it also provided a respectable means of earning an income.

This china craze as it was sometimes referred to didn’t remain an English fashion, it spread to the United States and Canada where women indulged in learning new skills and developing their artistic talents by painting unique works of art on glazed blanks. China painters in Canada used blanks purchased from porcelain factories in France, Germany, England, and the United States.

It isn’t often that we get a signed piece that represents such an important time as the late 19th century and early 20th century and what it meant for women, especially Canadian women. It is all the more special because the piece below was done by a Canadian artist by the name of Edith Gertrude Vandermade. We can often find a wealth of information on English artists like Doris Jones and J. A. Bailey whose works are widely recognized and sought-after by teacup enthusiasts around the globe but pieces decorated by lesser-known artists were often unsigned and there is little information about the people who created these one-of-a-kind works of art.

This stunning one-of-a-kind piece has a band light and dark pink roses and vivid green foliage bordered above with elegant gold leading to the rim and glossy black lending a wonderful contrast down to the foot. The inside of the teacup has a beautiful rose that sits on a luster background providing an iridescent glow of reflecting colors. We now have this gorgeous piece listed on our website here.

A Story Behind Every Teacup

Born in Ontario in 1877, Edith Gertrude Vandermade was a ceramic artist specializing in hand-painted china and is recognized as Regina’s premiere china painter and ceramist. She opened a studio in 1924 where she sold her painted teacups. She held classes and exhibitions of her work every year. In the summer, she taught at a Regina Beach resort and co-owned a business with Mrs. G. P. Plaxton called Kosy Korner from 1936 to 1946. She also operated a tea room in the Plaxton’s building called The Ark. From 1936-1946 Edith Vandermade and Mrs. Plaxton operated a business called the Kosy Korner in Regina Beach. Vandermade sold her teacups and porcelain paintings at both businesses and taught china painting at the resort in the summers. A number of people recalled her wonderful teacups and saucers as souvenirs of their time at the resort and also mentioned her parrot Polly who hung out at the cafe. Edith Vandermade passed away in 1961.

An Inspiration And an Involved Member of Her Community

A talented artist, Edith Vandermade was a graduate of Alma Ladies College in St. Thomas, Ontario. She was an inspiration through her involvement in the artistic community, speaking to groups, teaching, and exhibiting her works.